Visit to the Mayor's Chambers 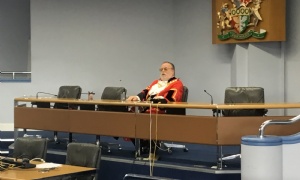 The Mayor showed them around the chambers which are full of historical artefacts including a picture of the Queen setting foot in Hillingdon, which cannot be seen any where else. He also advised the children about the process of becoming Mayor. The pupils were then taken to the Council chambers and were able to practice using the microphones as they participated in a live debate.

For photographs please see our Gallery